Number plates claimed to be road legal but they're not 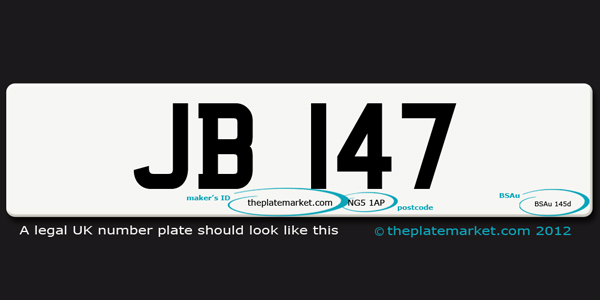 And unwitting customers are buying them.

We've seen so-called "road legal number plates" for sale online. Many on a well-known auction site, but also on other websites. And quite frankly, they are not road legal.

They may look road legal. But, unless you're familiar with the number plate rules in law, you could easily be misled. And it's happening every day.

Firstly, the DVLA requires that all number plate manufacturers are registered with them. That's a legal requirement. That's intended to stop the manufacture of fraudulent number plates used in crime such as petrol drive-offs, illegal parking, speeding, and so on. And sometimes letters are distorted beyond recognition making it impossible to read the intended registration number even by a human being. So what's the point of having them in the first place?

Number plate customers are being duped

Unwitting drivers who have bought number plates from these sellers could be stopped by the police and fined.

Now, we know that some drivers request number plates that are mis-spaced and even ask for letters to be distorted (for instance to make a "V" look like a "Y" or a "4" look like an "A"). All of which is illegal of course.We've turned down many such requests. If they then source those number plates elsewhere and use them... then get stopped and fined, that's their decision. My concern is the unwitting buyer who thinks they are buying road legal number plates when they are not.

So, beware of cheap number plates claimed to be "road legal". If your number plates don't look like the one in the image above, then they are probably not legal.