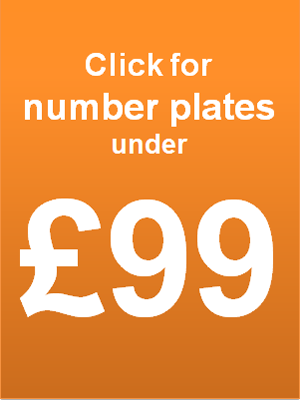 Looking for a private number plate, but on a tight budget? You don’t have to break the bank to indulge. The cheapest start from under £99 (plus government charges).

Use these special searches to get what you're looking for:

Once you've found what you're looking for, our services to transfer it to your vehicle are free of charge.

What is the cheapest private number plate I can buy?

Usually the lowest priced registration numbers in the UK are Irish number plates, so-called because they are issued in Northern Ireland. Some of the letter combinations are great for shortened names, like BAZ, GIL, or WIL. And they are perfect for hiding the age of your car because they have no year identifier. The number plate transfer process is the same for Northern Ireland registrations.

You can generally also buy some suffix number plates at rock-bottom prices if you're not too worried about the actual letters and numbers. These are popular with owners of classic cars who are restoring their prized possession to as close to the original as they can. If the number plate has been removed in the past, they will often by another suffix registration that's from teh correct year for their car.

Dateless number plates will generally be a bit more expensive. But you can still get lots of choice for under £800 if you are flexible about the combination of letters and numbers.